Learn from our three main themes 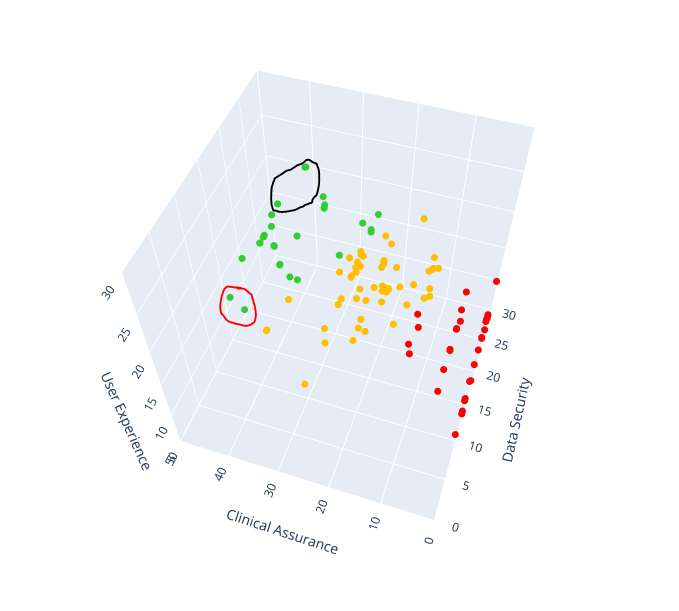 According to Public Health England, approximately 1 in 4 adults worldwide have high blood pressure, and it is projected to affect more than 1.5 billion people around the world by 2025. High blood pressure can lead to stroke, coronary heart disease, vascular dementia and chronic kidney disease, and so places considerable strain on the NHS. As such, heart and blood vessels apps are becoming increasingly necessary in managing health issues such as high blood pressure.

The problem remains, however, that many blood pressure apps are untested, unregulated and potentially dangerous.

In order to address this issue, we’ve reviewed more than 120 of the market’s most downloaded heart and blood vessels apps, looking at 226 criteria across three main components: Data Security (DS), Clinical Assurance (CA) and User Experience (UX). Analysing this data allows us to identify the strengths and weaknesses of the sector and spot the stand-out apps.

To reveal the results of our analysis, we’ve plotted the apps’ data in a 3D chart (above).

1.       This is a market of low quality apps, with just over 75% of the Apps not meeting our quality threshold of 65% and having areas that need addressing. Roughly 25% of these scored less than 45%, which is slightly better than the figures from the Pregnancy Report last month.

2.       There were two stand out Apps (circled in black) that both achieved the high score of 88% – FibriCheck and Lincus Companion. Both the iOS and Android versions of Lincus Companion scored 88% which shows great consistencies across platforms. The FibriCheck iOS App scored 88% whereas the Android version scored just slightly lower at 86% due to a lower sub-score in Data Security.

3.      As mentioned in other Apps Rating Reports, Clinical Assurance is not enough for a well-rounded app. The two outlying Apps (circled in red) both scored well overall, but missed out on edging into the top group due to poorer scores in the Data Security and User Experience sections.
To explore our 3D chart, click here.
Or to read our heart/blood vessels app reviews, follow this link.

Discussing European digital health assessment frameworks, including projects that ORCHA has worked on in the Nordics, Netherlands and Israel

An international snapshot of how evidence is defined around the world

Digital Health Accreditation in the Netherlands

Improving the lives of those living with a mental health condition

Discover how our services, including Reviews, Digital Health Libraries, and market intelligence reports, can work for your specific needs.

Search ORCHA’s App Library, featuring thousands of independent app reviews across a broad spectrum of health conditions. Every app is evaluated against more than 300 measures across Clinical/Professional Assurance, Data & Privacy, and Usability & Accessibility, making it easy for you to find the best apps for your needs.

*By submitting this form, you are providing ORCHA with consent to contact you via your email provided.

Cookies on this site are used by ORCHA for different purposes, including measuring site usage so that we can improve your user experience. To manage or disable these cookies, click “Accept” or “Decline”, or for more information, read our Cookie PolicyAcceptDecline